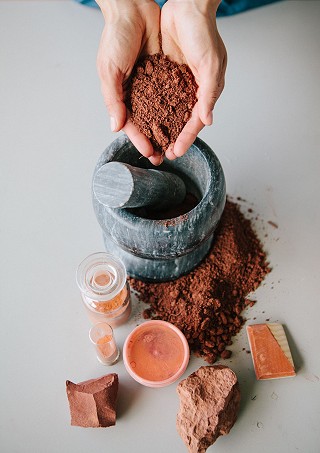 Colours have historically carried certain connotations. Within art and design, specific pigments have been attributed rich or poor status, defined as luxury or commonplace, intended for the elite or for the masses. But today, when any hue can be synthesised digitally or chemically, how do we attribute meaning and value to colour?

The colour of luxury

Status and worth has been attributed throughout history to colours according to their provenance and procurement. The ease or difficulty of extracting pigment from its natural form determines its value. The formula was simple: the scarcer a colour and the more arduous its procurement, the higher its value.

When plants, animals and common earth minerals provided natural pigments and dyes, artistic palettes were restricted to warm, earthy tones rich in red, orange and yellow. Only the elite had access to strange and wonderful shades of blue and purple. In art and design, these expensive tones were reserved for the upper echelons of society. Now that any colour can be manufactured without natural raw materials, innovation has rendered the clear social delineations of colour defunct. Industrial innovation in pigment production has democratised colour use, although this greater accessibility comes with a devalued connection to the natural origins of our material resources.

No colour in history epitomises a fall from grace quite so well as that of now-ubiquitous blue. Once the colour of aspiration, status and luxury, the hue was only seen in the paintings of deities and the clothing of royalty. Now, indigo blue is synonymous with workwear and cobalt has been commandeered for the branding of budget airlines and mass-produced furniture.

With few blue flowers, fruits or animals existing in nature, this particularly scarce colour is most often seen in the ephemeral illusions of distant sea and sky. First named by the ancient Egyptians, who discovered and mined the semi-precious lapis lazuli stone for its celestial hue, blue was the first royal colour. Ground to powder to create lavish makeup, or combined with gold to adorn the tombs of pharaohs, its exorbitant price and extreme scarcity drove the innovative Egyptians to engineer an alternative. By combining limestone, sand and copper over heat they produced calcium copper silicate, a bright, saturated hue eponymously titled Egyptian blue that lays claim to being the world’s first artificial pigment. As its formula disseminated across continents, Egyptian blue appeared in other cultures, including Mesopotamia, Persia, ancient Greece and Rome. However, the proliferation of the ancient synthesised hue had little impact on its value as its production was time and labour-intensive, costly and toxic.

Whether synthesised alchemically or occurring naturally in lapis lazuli, blue retained its exclusive status until the dawn of the industrial age, when the advent of modern manufacturing made production of artificial blue dyes and pigments cheaper, faster and safer. Modern blue pigments remained as potent and durable as their previously prized ancient equivalents, but its greater availability hastened its prolific adoption. Spurred by past connotations of luxury and wealth, blue was soon applied to almost any material in any walk of life.

Revisiting a colourful past

In today’s design landscape, where almost any colour material or colour finish is possible, some designers question the value of limitless industrial democratisation. To rediscover old luxury and preserve natural provenance, they are revisiting colour procurement methods of the past. Evolving definitions of luxury suggest the inherent narratives of colours and materials add weight to their value. As a colour’s story becomes part of its luxury, provenance and material journey increasingly determine its worth.

Naama Agassi, a designer based in Tel Aviv, examines the shifting cultural meaning and values of different colours over time. In her Artificial Regality series, Agassi explores the contemporary value of easily synthesised pigments that were once elusive and valuable. In Imperial Purple, she investigates the evolution of the colour. Historically coveted by the upper classes and royalty, purple denoted wealth and power. Tyrian purple, rare in nature, was harvested from mucus secretions from the hypobranchial glands of predatory sea snails from the Muricidae family, lending the colour its alternative name, Murex purple. Native to the Phoenician cities of Tyre and Sidon, now part of Lebanon, the molluscs paid a high price for their precious purple cargo. As many as 250,000 snails gave up their lives to yield just one ounce of usable dye. By the third century BC, Tyrian purple is believed to have been worth more than gold, but the colour’s fortunes changed abruptly in 1856, when an English chemist, William Henry Perkin, inadvertently discovered a way to synthesise the regal hue. Flooding the mass market, purple lost its prestige. Agassi pays homage to Tyrian purple’s regal origins in her collection of artefacts, which reference objects of luxury and divinity, such as perfume bottle and incense burners.

Laura Daza, a similar colour storyteller, focuses her attention on pigment origins. Questioning the value of contemporary colours, the designer reminds us of the ancient provenance of the extensive palette to which we have become accustomed. Believing that the narratives and alchemical journeys needed to procure these original pigments give them their inherent value, the designer pays homage to their rich history. ‘Today, colour is a commodity mechanically made and claimed for mass consumption,’ Daza explains. ‘Once colour had a unique aura, power and magic that brought stories alive.’

Through ongoing research, Daza revisits the forgotten pigments of the past to encourage a renewed appreciation of the ancient rituals and techniques that facilitated today’s extensive colour palette. To reawaken awareness of the provenance and meanings of colours that surround us, Daza has created a DIY Colour Recipe Book. It tells the story of eight ancient pigments – Whiteshell, Saffron, Ochre, Verdigris, Malachite, Azurite, Lamp Black and Mummy Brown. Originally created by grinding mummified bodies, Mummy Brown’s usage peaked in 18th-century British art. To accompany the handbook, Daza created a collection of bespoke vessels that exemplify the intensity of each powerful pigment.

In a technological age, when ancient and traditional techniques and rituals are at risk of redundancy, it is important to preserve our colour heritage. The Forbes pigment collection at Harvard Art Museum’s Straus Center for Conservation and Technical Studies exhibits an awe-inspiring collection of 2,500 colours, the aim of which is to preserve the pigments of the past and to aid in the restoration of classical artworks. The collection houses the colours in pigment form and the original natural raw materials, including lapis lazuli rock, as well as materials of poorer origins, such as cochineal beetles, the source of reddish carmine pigment, and rattan palm tree resin, used to produce dragon’s blood pigment.