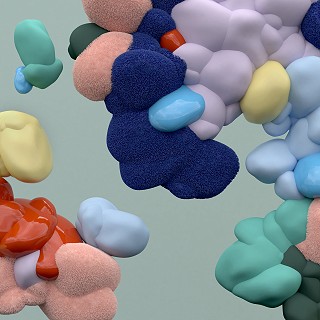 BETTER THAN THE REAL THING

Artists, designers and brands are turning to digital realism to create compelling experiences both online and offline

‘What is reality?’ asks the central character at the beginning of the short film Robert Rushkin – The Artist. The mockumentary introduces viewers to a fictitious contemporary artist preparing for a new show, and slickly mixes earnest live action with dazzling, photo-real computer graphics. At times, it’s tricky to tell what’s real from what’s rendered, what’s truth and what’s a tall tale.

Created by London-based creative studio Builders Club, the film reflects the fuzziness of the world in which we live. Thanks to smartphones and tablets, we live in a digital reality, fluidly shifting between books and Facebook, chat and Snapchat, shops and sites. And although we seek out experiences, our meals out and the gigs and art shows we go to are documented – and augmented – by our ever-present phones.

An explosion of creativity

Realer-than-real effects, like those in the Robert Rushkin film, were once the preserve of Hollywood studios and commercial post-production houses with six-figure budgets. But, as Moore’s law predicted, the power of computers increased exponentially, and prices fell. Cheap, easy-to-use software, such as Cinema 4D, After Effects, Houdini and Maya, spread computer-generated imagery from a tiny number of professional post-production-house editing suites to countless designers’ computers around the world.

These changes have triggered an explosion of creativity: a wave of artists, designers and developers pushing the edges of what’s possible in digital design. Pioneers from the early and mid 2000s, such as Zeitguised, ManvsMachine and Pleix, have been joined by a new generation of artists, including DVTK, Six N. Five, Lucy Hardcastle and Wang & Söderström.

Bucking the dominant trend for flat web design derived from the Swiss Style and popularised digitally by Microsoft, Apple and Google (particularly the latter’s Material Design system), they have created a new aesthetic based on realistic CGI, a trend that might be termed digital realism. Working with cutting-edge brands such as Nike, Lexus, Adidas, Absolut, IKEA and Chanel, they’re breaking into the third dimension, creating immersive, tactile, fantastical brand experiences in animation, web design, sculpture and installations.

Each of these designers has a particular style, sometimes described in terms such as hyperrealism, super-realism, digital surrealism or abstract realism. Look more closely and a distinct vernacular of forms, textures and colours has developed.

At its heart, digital realism delights in the juxtaposition of the real and the synthetic – unsettling viewers by blurring the lines between the realistic and the fantastical in shape, texture, colour and attributes.

A homespun, folksy aesthetic has permeated magazine editorials, advertising and film in recent years: natural materials and unfiltered colours, unposed portraits, pastoral landscapes and a fetish for handicraft and authenticity. In sharp contrast, the digital realists embrace computer-generated objects and environments, and overtly synthetic hues. In the playful tradition of Dadaism and postmodernism, they delight in creating ambiguity, asking viewers to guess whether their work is real – or not.

Colour is translated into a palette of artificial pastels – loud yellows and greens, dusky pinks, purple and blues. Often a jarring pop of bold, contrasting colour serves to remind viewers of the juxtaposition of real and unreal.

The digital aspect is made apparent by the forms and properties in these works, seen in powder-coated geometric shapes, mirror-sheen glass orbs and eerily smooth gold hands. Perfectly clean, crisp, organic and sharply angular shapes float, swirl, bulge and grow in a virtual 3D space of impossible, grotesque, alien ‘physics’.

Astute brands have realised that people’s first encounter with them often isn’t on television or in a magazine, but online, so they are searching for ways to engage people whose attention is switching to social and mobile. This has meant moving their advertising media spend to the platforms where their customers spend time: Facebook, Snapchat, Instagram, YouTube and WhatsApp, among others.

But as brands became ubiquitous online, it became harder – and more important – to differentiate. A solid brand website and e-commerce operation are table stakes. To stand out, brands are looking to create more immersive and exciting brand experiences across channels, in the form of in-store digital experiences, online films, websites, games and interactive installations.

Digital realism’s 3D quality, the power of photorealism to enthral viewers, and technology’s ability to conjure the impossible into being, give brands a rich set of tools with which to engage people. Whether it’s Lucy Hardcastle bringing to life the abstract notion of scent for Chanel, Wang & Söderström weaving the technical story of EQT technology for Adidas, or Thomas Traum creating a race across an alien-looking landscape for Kenzo, the genre and the possibilities are boundless.

Digital in the real world (DIRL)

Reflecting the blurry, playful boundary between virtual and physical, man-made and machine-made, this aesthetic is following datamoshing, memes and emojis, jumping off our screens and into our spaces.

The future of brand experience

Looking ahead, the potential of digital realism is profound. Today’s prevailing 2D digital aesthetic is ideally suited to a world of screens, apps and websites navigated by clicking, tapping, swiping and scrolling. But the next generation of computing platforms is emerging, drawing on virtual and augmented reality, led by Facebook-owned Oculus, Microsoft HoloLens and Apple’s ARKit. These 3D environments will be either virtual, or a digital layer on the physical world, as demonstrated by Snapchat’s filters, Pokemon Go!, Jeff Koons’s virtual sculptures and IKEA’s Place app. They will be accessed through glasses and wearables, rather than screens, and allow more natural interfaces through voice and gesture.

In that landscape, the brands and designers already experienced in creating virtual worlds that blend physical and digital, and weaving stories within them, will have the advantage when it comes to beguiling customers in entirely new ways.

At the end of Robert Rushkin – The Artist, we catch a glimpse of where these technologies might take us. Our guide unveils his latest work, Red Cuckmere Haven 2016, a vast crimson curtain that defies gravity, unfurling upwards for hundreds of metres, spectacularly veiling the sky. It’s computer-generated, of course, but still strangely moving. ‘What we perceive as reality may be no more than a great illusion,’ says Rushkin. ‘But in the end, does it matter?’

One of the pioneers of this style, Berlin-based phygital art and design studio, Zeitguised, has been creating ‘abstract realism’ art films and commercial work for clients including Absolut, Chanel, Mercedes Benz and Lexus since 2001. Founded by Henrik Mauler, a trained architect and stylist/sculptor Jamie Raap, the collective is made up of a network of exceptional designers and works with Cinema 4D and Houdini among other software packages, Zeitguised create poetic work like geist.xyz an algorithm and process driven exploration of shape behaviour, texture and colour that is hyper-realistic, but completely computer generated: ‘0% organic’, as Mauler proudly dubs it.

‘It is an aesthetic of seduction, in which the simulation of physical qualities of light and material allow for a trajectory of thought towards something that might exist, even if it only becomes quasi-physical and tactile in the mind of the viewer for the moment… Colour, material and shape are at the centre of the narratives we construct. How they dance with each other, how their frequencies tickle the senses, those kind of choreographies are what our art is all about.’ Henrik Mauler, Zeitguised

Lucy Hardcastle, part of the new wave of artists and designers exploring the digital aesthetic, followed a degree in textile design from Chelsea College of Art and Design with an information experience design master’s degree from the Royal College of Art. Her Phygital Objects show for Frame magazine focused on ‘how digital informs the physical, and vice versa, within design’. Glow, a collection of abstract, rendered images and objects, uses high-gloss, mirrored and reflective surfaces, with textures of silk and velvet to ground the work. She describes her palette as ‘emotive and atmospheric’, using ‘millennial’ pastels contrasted with strong colour. A fan of Cinema 4D, she branched out into WebGL to create Intangible Matter, an interactive experience about scent, for Chanel and i-D.

‘Running themes in my work include the boundaries between digital and physical, and what craftsmanship can mean in the third industrial revolution we’re currently in. I feel it evokes a sensation of visual satisfaction through movements and interactions that can be at best difficult, even impossible, to create through live-action video. My work is all about tactility. I love to play with the boundaries between digital and physical, creating illusions and challenging the viewer’s perception of what digital can mean. I want to position myself as the sensual and tactile storyteller of the digital design world.’ Lucy Hardcastle

Interactive designer Kim Boutin and 3D designer David Broner formed French creative studio DVTK in 2015, building playful digital stories and interfaces for luxury brands to help them stand out from the flat, seamless user interfaces currently in vogue. Influenced by video games, sci-fi utopias and architectural mock-ups, they use WebGL, sound design, and sensors such as accelerometers to create worlds for people to explore. Such projects include an immersive, filmic, interactive story for Kenzo, a brash, 90s-inflected microsite for Fiorucci, and a pastel-hued virtual-reality nail salon for Wah Nails.

‘Our approach is radicality, playfulness and a hint of friction. To break the monotony of flat design, we use gradients, bumps and lighting effects. To avoid the pixel perfect, we add curves and ornaments. It’s hard to describe our work in terms of colour and texture… we want to create surprise, and to do that we use playfulness. We want people to feel something, so we want to be bold and radical, and cause a reaction… even if it’s “What is this?”’ Kim Boutin, DVTK

‘We are really into deforming reality – trying to create a digital world that can be manipulated. We are always playing with the concept of the digital-physical world. We can create worlds with no limits, and explore our imagination without bounds. In the physical world you have limitations to take into account – in our digital world we go as far as we want. ‘We try to push the viewer to the point they assume the video is real. Once we reach that, we twist something in order to make it surreal. But we maintain hyperrealism, so the viewer will be very confused about what is real and what is not. It’s similar to the experience of virtual reality: you understand the image is computer-generated but you feel and accept the experience of being inside that world.’ Andy Reisinger, Six N. Five

‘We love to explore the borderline. We want to marry mixed reality worlds and bridge the physical and digital divide – a hybrid not only for aesthetic reasons, but to stretch and explore our senses further. This aesthetic is defined by the balance between real and surreal, rather than a specific colour or material. ‘Materiality plays a huge role, not only by creating tangible visuals by recreating material behaviour from our physical surroundings, but also by flipping its behaviour and experimenting with it – making human skin as reflective as a mirror, or giving an apple glow-in-the-dark abilities. Just like with materials, this play could be applied to physical laws as well. Reverse gravity, melting stone sculptures and rigid structures that suddenly get soft and bouncy are examples.’