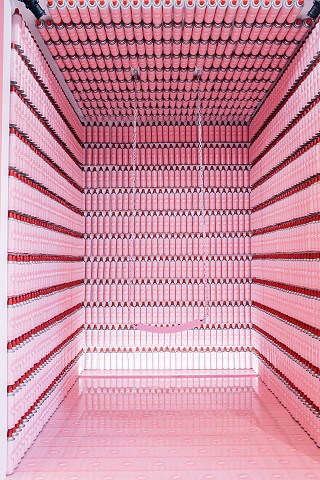 Impactful colour dominates on social media and its influence is spreading beyond the screen...

The visually arresting, playful world of social media is breaking out of its online confines – its colourful, Instagrammable images are now shaping and changing the real world.

At the London Design festival, Camille Walala’s inflatable castle installation, Villa Walala, lit up Instagram with more than 1,700 posts over the week. Similarly, at Milan’s Salone de Mobile, works such as Le Refuge by Marc Ange had far more social media impact than any others. What these works have in common is a fun, immersive quality that uses colour to create impact on screen, as well as in real life. Prompting viewers to capture individual takes and vistas with their smartphones, they act as ready-made still-life sets for visitors to record, photograph and share. So, if impactful colour in spatial design is gaining more traction on social media, might that in turn influence the commissioning of spatial environments?

Social media is already influencing other sectors. In Los Angeles, fantasy food sensations such as Little Damage’s cartoon-like ice cream cones are garnering queues that match the popularity of their Instagram feeds – 202,000 followers as of November 2017 in the case of Little Damage. Whether food, interiors, installations or even holiday destinations, high-impact moments create spikes of interest online, and now they’re influencing the design of real world experiences too.

‘I’ve seen a huge shift recently,’ says Amina Mucciolo, an artist whose brightly coloured, pink-dominated lifestyle has made her a YouTube, blog and Instagram sensation with 218,000 followers as of November 2017. ‘It started with colourful hair, then colourful food. Today, the whole idea of living a colourful life has become very pervasive.’

Mucciolo launched her made-to-measure studio in 2011, but her business hit tipping point in the last year, largely via Instagram. ‘There are so many terrible things going on in the world,’ she says. ‘People need colour, novelty and fun as a distraction. It offers a hopeful perspective and somewhere you can retreat when the world gets too serious.’

Design features previously dismissed as superficial, or confined to the online world, are becoming a viable new direction for the creative industries. Impactful colour is becoming prevalent in spatial design, not necessarily because of social media, but because people need escapist, immersive spaces. Following years of normcore and the dominance of a Nordic pared-back aesthetic, people want to spark a new kind of joy through the use of vivid, rich colours and immersive spaces that, crucially, generate more attention online.

The new genre of designed experience

At the Museum of Ice Cream In Los Angeles, visitors can dive into a pool of sprinkles or swing through a corridor of bananas. It’s certainly surreal, but this temporary exhibit in the Arts District keeps postponing its closing date. Its sell-out success is part of a new genre of designed experiences created as much for snapping and sharing as for seeing in person. What works online also charges the spatial world with impact and emotion.

With a mission to ‘bring people together and provoke imagination’, the Museum of Ice Cream might be encouraging its audience to keep snapping while going around the exhibition, but it’s also prompting laughter while they’re there. At a time when people are living increasingly isolated, on-demand lives, maybe these hyper-real experiences are growing in popularity and number because they create shortcuts to connection and intimacy via social media and satisfy cravings for visceral experiences. Refinery29’s 29 Rooms, staged in New York and Los Angeles, fits this explanation. Comprised of 29 individually themed rooms, it’s a multisensory playground in which some rooms work much better when viewed through a lens or screen.

The impact on cultural institutions

It’s rare for a cultural institution to state that an exhibition was commissioned with Instagram in mind, but there’s no denying that the influence of social media permeates even traditional art institutions. ‘If I’m in an art exhibition, I am actively looking for that thing that I can post to say I’ve been there,’ says Kate Bussmann, social media commentator and author of A Twitter Year: 365 Days in 140 Characters. ‘There’s cultural cachet involved, but I also want to tell people about it, if it’s good, so they come and see it.’ As institutions seek to amplify experiences to a broader audience, it’s little wonder that impactful cultural experiences that dominate social media, such as The Design Museum’s Breathing Colour exhibition, which ran over the summer, are also the ones that have attracted the big crowds.

Alex Newson, senior curator at the Design Museum, is adamant that he would never prioritise Instagram impact at the expense of the gallery experience. ‘My primary concern will always be people’s experience in the gallery itself,’ he says, but the online documenting of an event is undoubtedly of importance to the marketing departments of these major institutions. The Design Museum now hosts Instagram private views, also described as Insta-meets. ‘Some Instagrammers spend hours in the exhibition,’ says Newson. ‘They experience it very differently to the normal viewer.’

Although Instagrammers devote a significant portion of their attendance to devising those all-important captions and hashtags, it appears Instagram and other visual platforms, such as Tumblr, can act as a helpful bridge between the viewer and the exhibit. Instagram and similar platforms allow viewers to get up close to the work and take a little piece of it away with them at the end.

Social media also makes the experience significant. Whether immersed in a gallery such as San Francisco’s Color Factory, a Yayoi Kusama installation, Sketch’s pink dining room, or any other Instagram-friendly space, crystallising the experience and broadcasting it on social media makes it last. Bussmann says early Millennials, also known as Generation K, ‘don’t have any money, so when they do something they are going to make the most of it’. These cash-strapped, experience-hungry, eager attendees make a special effort to get to new places early, so they can be first to experience it and, crucially, first to upload it, tell others what they thought and maximise their kudos.

This eager approach augments the impact of what it is being done or bought. ‘Things are very visual these days,’ says Bussmann, ‘it transcends into gift giving too. It’s not just about the physical act of giving, it’s also about the gift being snapped and put up onto Instagram.’

Brands are always keen to stimulate connection and go viral. Starbucks recently entered this space, first with its Unicorn Frappuccino, inspired by the unicorn social media phenomenon, and more recently with the Zombie Frappuccino. The beverages’ bold colours and design were clearly created with Instagram in mind. The lesson for brands across the board is that the use of confident colour to create an impactful, immersive experience is a great way to fast track to brand love, if well executed. Particularly within hospitality or retail, delivering magical peak moments can often distract from the more mediocre aspects of a product or service.

When it comes to food, the connection with social media is so well established that restaurants are getting up to speed. Italian chain Zizzi has trained its staff to help diners capture that perfect food shot. And savvy chefs know they need at least one dish on the menu that looks good enough to post.

Although obsessing about how something will play on Instagram might make purists roll their eyes, there is a genuine sense that pandering to social media damages integrity. However, something new happens when people start paying significant attention to the food put before them. They slow down and become more thoughtful about their food choices. To some extent, it explains a new approach to weight loss: the WhatsApp Diet, which involves groups of people snapping everything that passes their lips. Obsessing over the look of food also highlights when a plate of food appears dull or monotonous, thereby encouraging people to eat more colourful healthy foods. With food, bright colours are always good.

Likewise, when it comes to holiday destinations, the more colourful the better, as Millennials are unashamed to admit. Recent research by Schofields Insurance found Millennials choose hotel destinations on the basis of ‘how Instagrammable the holiday would be’ over factors such as cost, personal development, and sightseeing opportunities. No wonder numerous lists exist of the most Instagrammable holiday destinations, such as Morocco’s blue city, Chefchaouen, or Casa Luis Barrágan in Mexico.

A bit of perspective

According to Newson, nothing has really changed. ‘People have always been interested in colour and bright things,’ she says. Sights described as Instagram-friendly today were labelled photogenic a decade ago. Although it seems extreme to select a holiday destination because it’s photogenic, it’s not that different from Monet choosing to visit the French Riviera. We have always sought out beautiful holiday locations and recorded them with painting or photography.

The big change is the way in which forces have combined to turbocharge today’s thirst for impactful colour. Social media is producing a proliferation of immersive and intense experiences just when we need to make each moment count, when we need to escape agonising news bulletins, connect with others, and when we’re tired of the IKEA life and blonde wood tones.

The rise of a more colourful, aesthetically arresting, escapist world should, says Mucciolo, be embraced. ‘We need our lives to be more magical,’ she says. ‘Even what I would have defined as conservative brands or people are responding to this need for colour and lightness. It’s turning into a snowball effect, so expect the world to get a bit unrecognisable for a while.’