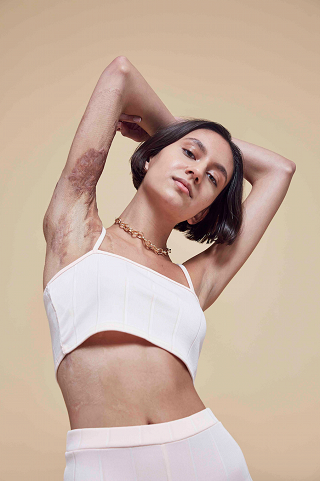 Debunking the myth of body perfection

Uniformity is starting to seem weird and boring – and finally, some smart brands are listening...

The fashion world is in flux, as always. But today’s changes were not decreed by Madison Avenue – they came from us. Ideals of beauty have always responded to the culture of the day and the recent embracing of diverse body shapes, skin types and physical conditions is in large part a reflection of the transformative power of social media. People are disputing beauty ideals in blogs, imagery and Insta feeds, using the power of tens of thousands of followers.

In response, brands such as Asos have created plus-size menswear that genuinely flatters. Chromat draws on founder Becca McCharen-Tran’s training in architecture to offer swimwear, lingerie and sportswear that enhances fuller figures as well as the svelte. And why stop at body shape? The skin positivity movement is also influencing fashion and media; the rise of no-filter acne images has attracted wide attention and Missguided and Asos have both featured models with visible stretch marks and acne in their campaigns. Lingerie brand Aerie also championed non-retouched images in its most recent Aerie Real campaign, which featured 57 women of diverse backgrounds, ages and body shapes crowdsourced through its social media channels. The images include individuals with conditions such as type 1 diabetes and alopecia alongside the brand’s ambassadors, model Iskra Lawrence and gymnast Aly Raisman.

Power to the people

‘The hierarchy is breaking down and the ability for people in fashion to dictate a particular model of fashionability is no longer possible,’ says Jay McCauley Bowstead, who lectures in cultural and historical studies at the London College of Fashion and is author of Menswear Revolution: The Transformation of Contemporary Men’s Fashion. In evidence, he cites the waning influence of former fashion arbiters such as Vogue magazine, observing that, compared to the digital realm, they can very quickly seem out of touch. Overly conformist model types are starting to feel old hat. ‘It feels quite outdated today to have everyone looking the same,’ says McCauley Bowstead. ‘Diversity feels more contemporary.’

He is currently writing a paper on the shift towards body diversity. ‘Body-positive, fat, disabled, trans and queer influencers with large followings demonstrate that you don’t have to be thin, young, able-bodied or gender-conforming to be fashionable, cool and desirable, and they are increasingly courted by fashion and lifestyle brands,’ he says.

The mixed-race, gender-queer influencer Marquimode has over 11,000 followers on Instagram, as of September 2018, and has worked for brands such as Asos; Megan Jayne Crabbe (Bodyposipanda) gained a million followers by promoting self-acceptance and an embrace of tummy rolls and recently published a book about her recovery from anorexia, titled Body Positive Power: How to Stop Dieting, Make Peace With Your Body and Live. There will probably be some brand collaboration soon.

The question now might be: are brands featuring such models just to seem contemporary, or is there a real attitudinal shift in the fashion industry? One criticism from the body-positive movement is how conventional the diversity we see today can be. Model and influencer Mama Cax, for example, may only have one leg, but she is also strikingly beautiful. Winnie Harlow, now modelling for Chanel, has the skin condition vitiligo, but she is also tall, slim and stunning. So have we really come that far at all?

The body in context

These are certainly palatable images of diversity but nevertheless, the cultural conversation around the body is shifting. These women have stories. They have risen to fame because of those stories and so it becomes harder to look at an image without an awareness of what that person has experienced. Suddenly we move beyond pure aesthetic and view bodies in the context of what they have done. This is very powerful, particularly for teenage girls, who can struggle with their changing bodies and the pressure to conform to unattainable beauty and weight ideals.

Zebedee Management has built its modelling agency on this concept. The first agency in the UK to focus exclusively on models with physical and learning disabilities, its mission is to increase the representation of people with disabilities in the media and bring the fashion industry up to date. Founders Zoe Proctor and Laura Johnson now have over 130 models on their books, each spreading the message to embrace what you have and tell your story. And people are following those stories rather than just focusing on the bodies they can see.

Crucially, from the perspective of self-worth, it’s important to take pleasure in your body. This is not about aesthetics, but about how you feel, which is perhaps the reason why some people are choosing to spend less time in the rigid confines of the gym – with all those mirrors – and more time embracing a more rounded concept of fitness. Witness the popularity of ecstatic dance; yoga raves such as Morning Gloryville; or the Animal Fitness outdoor fitness programme.

‘Today it’s more about lifestyle and attitude, less focused on aesthetics and more about things that make you feel good, so you might go to the gym because you’ll feel great afterwards rather than because you need to get to a target weight,’ says McCauley Bowstead.

This principle is behind the rapid rise of fitness coach Joe Wicks, who preaches a body-positive, self-accepting form of fitness focused on eating healthily, not being overly punitive and working less on the shape of the body than on feeling good – a positive, attainable message.

Of course, what’s in fashion will always be the look that is hardest to achieve. It was fuller figures in the post-war era of rationing, when most were trying desperately to look less scrawny. In the modern period of cheap calories, being thin shows you have money for a personal trainer and time to commit to that macrobiotic diet plan. So, what of today’s desire for deeper stories presented by diverse people who are seen within their context? ‘There’s a desire for authenticity and something that feels like a genuine connection,’ says McCauley Bowstead. In an era where loneliness is on the rise, conversations about real bodies make us feel more connected to the world around us.

Fashion is shifting away from uniformity – when everyone looks the same, it’s boring, unrepresentative and now feels very out-of-date

Social media has brought alternative stories, body shapes, and beauty types to the fore – the fashion hierarchy has been flipped by the voices of the many

Seeing people in context is compelling, so influencers who represent diversity have gained fame for their personal, authentic stories

The discourse around health and fitness is changing and is now less about sweating, counting calories and racking up crunches in the gym and more about enjoying the feel of movement and dance