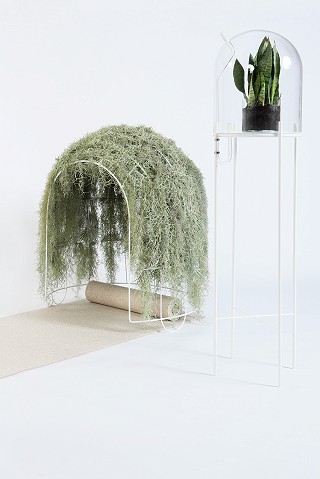 More than 50% of the world’s population now lives in cities. With increasingly urban lifestyles, our disconnection from nature and the loss of its benefits are greater than ever.

Designers, architects and service providers are using biophilia to improve urban lifestyles, whether at home, at work or in fitness. Biophilia-based design choices are based on research that is claimed to show increasingly legitimate scientific proof of the positive physical and cognitive effects of connection to nature.

Benjamin Schief and Judith Fassbender, industrial designers based in Germany, have developed In/Out, a symbiotic ritual place of self-cleaning that consists of three interconnected objects that serve as an interface between humans and plants. The plants require humidity and CO2, provided by users’ exhaled breath. As well as improving the air quality of the room, the plants are claimed to provide users with botanical fitness through mindfulness on breathing and attitude.

Biofit by Active UK offers indoor and outdoor nature gyms, and group fitness class biophilia concepts, designed to reduce stress levels and improve mood while working out. In a study carried out by Active UK, three quarters of 118 participants reported feeling less stress after their session, 87% reported an improvement in their positive mood state, and four out of five said they felt more connected with nature.

During Milan Design Week 2017, the Re:Charge Café by Humanscale and Vertical Field promoted well-being in a curated space that included a lush green, an air-purifying wall and a healthy bar that offered specialised green shots. Allowing visitors to re-energise and rejuvenate body and mind, it provided much needed respite from the bedlam of the week’s events.

Drop Drop by Patrick Ghosh is a plant-based water filtration system that it is claimed encourages the readoption of symbiotic human-plant relationships. Although the system can filter only one glass of water every 12 hours, the design requires little maintenance and is essentially a self-sustaining biosphere. Described as a ‘mini version of the Amazon’, it maintains the four key environmental factors of heat, wind, light and humidity at optimum levels within the biosphere for efficient transpiration.

Although we may be living increasingly urban lives, we still require connections to nature. Designers are now engineering symbiotic relationships into functional biophillia for the built environment.