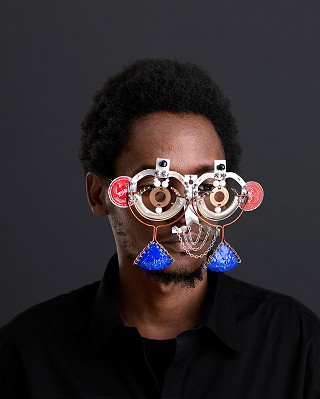 Identity is one of the strongest creative inspirations across all fields – in particular fashion, which is perhaps one of the most experimental and rebellious of all. As identity becomes more fluid and hybridised, its influence becomes ever more potent. Today we can layer multiple identities to produce endlessly varied combinations; mash-ups that draw on a limitless mix of nuances affected by the culture, geography and gender of others as well as ourselves.

It’s true that not everyone is embracing this wide-ranging acceptance – we are all too aware of entrenched misogyny, racism, anti-migrant sentiment, transphobia and inequality across the world. But for those with open minds and a modicum of imagination, this is a time where we have the freedom to curate and define our own identity – or do we? We have moved into a magpie era where we can pick and choose as we please – or can we? Does infinite choice dilute our own personal identities or does it make them stronger?

Multiplicity – challenging the sense of home

The days when we could easily define ourselves by stating where we were born are long over. In her TED talk Don’t Ask Where I’m From, Ask Where I’m A Local, writer and photographer Taiye Selasi argues that identity is linked less to birth or residential location than to three factors: rituals (where these are most familiar); relationships (where human connection takes place); and restrictions (involuntary constraints). This sense of being multi-local is reflected in much current creative fusion.

The idea that Western influences and concepts are the dominant global creative and cultural factor is similarly outdated. India, China, South America, and Africa in particular are centre stage in terms of global influence. Afripedia offers an online home for African creatives in the art, film, photography, fashion, design and music fields. The Afrofuturism movement also fosters the continent’s creative power. ‘Afrofuturism shows that we can imagine our own futures,’ says art director, fashion designer, trend forecaster and entrepreneur Nsimba Valene Lontanga, interviewed on OkayAfrica. ‘It forces us to restore our cultural heritage as the past is a way to predict the future. It reconnects us to untold stories; we can imagine how the future can be. You can’t create a future without what has happened before. The future is female and African,’ she adds.

Ingrid LaFleur’s multimedia Afrotopia curatorial project proposes a similar concept in Detroit, and media platforms such as the newly launched Nataal print magazine also set out to capture the creative spirit of Africa.

The current media spotlight on the pressures women face in the creative industries is leading to a fresh burst of activism to tackle female under-representation – and misrepresentation. The Male Gaze, a term coined by film critic Laura Mulvey in 1975, refers to the way that women have been used as tools or objects on which male desire is projected. Now the Female Gaze is reclaiming women’s power to create their identities on their own terms. Women are demanding to be heard and using the vehicles of art, design, film and media to amplify their voices. They are becoming the purveyors of culture: making films with all-women crews, putting together shows by women artists and creating platforms to tell women’s stories. This responds to a lack of meaningful representation of women in culture and media.

Greta Gerwig, nominated for a 2018 Academy Award, is one of just five women to be nominated for best director in 90 years and only 4% of top-grossing directors are women. Rachel Morrison, nominated for best cinematography, is the first woman ever to be nominated in this category. While women such as these stand out in more traditional media contexts, social media platforms are allowing women to stand up and make the content they are not finding elsewhere. Many young women artists – especially women of colour – are starting to forego the gallery institutions that have historically under-represented them and instead use Instagram to establish their professional identities. Brands and studios, including Nike, Walmart and Samsung, are now helping to empower women to create for other women, proving that the Female Gaze is a force to be reckoned with.

The concept of gender fluidity was one of the most influential in terms of identity among younger generations well before it was added to the Oxford English Dictionary in 2016. Around half of Millennials believe that gender is a spectrum, according to Fusion’s 2015 Massive Millennial Poll, while a 2015 YouGov survey found that almost half of British 18-24-year-olds class themselves as not 100% heterosexual. The internet has long been a rich source of information on the many different ways to self-identify and now the rest of the world is catching up; gender-neutral pronouns and identity documents are becoming more mainstream – in 2017, Canada became the 10th country to introduce gender-neutral passports.

The acceptance of trans-gender identities fosters a new sense of transformation in all fields. A recent issue of Material, the magazine dedicated to female-identifying individuals, links the terms transgender, transformation, transplantation, transition, transmission and transparency. ‘We wanted to capture the notion of being in-between, might that be in between places, definitions or identities. Transformation is a big part of our lives and a unifying experience,’ Kira Stachowitsch, the head of Material’s creative direction and strategy, tells It’s Nice That.

When we first heard of Lil Miquela, we weren’t sure whether she was real or not; at least it was made clear from the start that virtual model Shudu is digitally generated. Miquela, a veteran of cover stories, ‘interviews’ and a collaboration with Prada, now seems almost mainstream compared to avatars such as artist LaTurbo Avedon, who exists entirely in the virtual space, and whose work simultaneously emphasises the concept of nonphysical identity and the physicality of the internet.

Millennials and Gen Xers are entirely comfortable with a plurality of online identities and adept at customising their digital personas. This plurality is reflected in the physical world; in perhaps the ultimate fantasy identity mash-up, pregnant male aliens walked the runway for Xander Zhou’s spring/summer 2019 London Fashion Week show.

Not long ago, no self-respecting rapper would have had anything to do with anything as establishment as high fashion – and haute labels would have turned up their haughty noses at brand ambassadors from the street culture world. However, in the past couple of years, Louis Vuitton, Marc Jacobs, Saint Laurent, Versace and JW Anderson are among the luxury brands who have either featured hip hop artists in their advertising campaigns or even entered into product collaborations.

Street culture’s sense of community and authenticity appeals to Millennials and Gen Zers who would otherwise be hard for such labels to reach – and these are the consumers who represent the purchasing future of luxury. The Bain consultancy is already drawing attention to the ‘Millennial mindset’ and says that Millennials and Zers will account for 45% of spending on luxury goods by 2025. Haute takes on ‘luxury streetwear’ are already turning a healthy profit, with the high-end sneaker market growing 10% between 2016 and 2017. The appointment of Virgil Abloh, founder of streetwear brand Off-White, as artistic director of Louis Vuitton menswear, epitomises this identity shift.

High fashion is also turning to high camp, as normcore and minimalism give way to kitsch, colour and maximalism. Step forward again, Saint Laurent, alongside Molly Goddard and Gucci (the latter offering crystal-monogrammed socks) as another exuberantly inclusive identity takes to the catwalks.

It’s all about me (and you, and them)

The more the design landscape succumbs to the mash-up, the greater the emergence of confidence in creating and curating the identity (or identities) that we desire. There is also a welcome sense of inclusivity: we are intrigued by the identities of others, rather than judgemental. The days when identity was cast-iron and tribal – the days when mods and rockers used to meet specifically to start a brawl – have given way to a magpie culture that is more interested in sharing ideas than in fighting over them. Along the way this is liberating a joyful sense of fantasy and maxi-maximalism in the fashion world particularly. So should we welcome this new liberation of our identities? Consider the alternatives: extreme examples include gang culture and xenophobia. May the face of the future remain fluid.