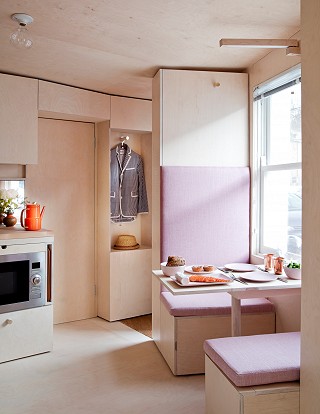 As more of us embrace urban living, architects are creating clever, elegant solutions to cater to a generation that wants to enjoy the benefits of city life without compromising on design, community or convenience. These spaces are very much designed to create chic, homely environments. They may be small, but they enable people to live in vibrant city centres, sometimes among communities of like-minded people. Flexibility is key, with designs that even allow people to move from city to city with their homes on their backs.

It’s a narrative of colliding consequences. The increasing pull of urban life coupled with the rising cost of accommodation has driven the demand for living spaces that make the most of every centimetre. Architects, designers and property developers are conceiving micro-spaces and mobile-living solutions that appeal to those who value experience over possessions and flexibility over the ties of a fixed abode.

Think of studio apartments with made-to-measure, transformable furniture; spatial configurations that can be changed at the touch of a button; pre-fab structures and easy-to-carry-with-you furniture. For flexible urban typologies, what’s needed is optimisation of space and attention to detail. The words of the late Italian designer Joe Colombo resonate strongly: ‘If the elements necessary to human existence could be planned with the sole requirements of manoeuvrability and flexibility, then we would create an inhabitable system that could be adapted to any situation in space and time.’

According to a UN World Urbanization Prospects report, 54% of the world’s population was living in urban areas in 2014, a figure expected to rise to 66% by 2050. The majority of the population in North America (82%) and Europe (73%) is already living in urban areas. Tokyo is the world’s largest city with 38 million inhabitants, followed by Delhi and Shanghai. By 2030, the world is projected to have 41 ‘mega-cities’ with more than 10 million inhabitants.

This accelerating urbanisation is coupled with the difficulty of getting on the property ladder. In the last quarter of 2016, the average price of a London property was £473,073, compared to £205,937 nationally. Inevitably, Millennials and older people moving to big cities are renting longer and buying compact apartments.

Enhancing smaller living spaces to help inhabitants feel less squashed and claustrophobic requires tricks of wizardry. Take the 13 square metres of former minicab office in Islington, north London, which Nina Tolstrup of Studiomama has redesigned with modularity and multifunctionality in mind. The bed can be folded up to create extra space and folds down to reveal bookshelves and a bedside table. Integrated storage and seating elements have dual functions, a table can be extended so it sits four people, and sliding doors cover shelving.

‘Because it’s site-specific and tiny, we made a cardboard model inside the studio first, playing around with different configurations to see the best way of maximising the space,’ says Tolstrup, who drew inspiration from Japanese consultant Marie Kondo’s ‘folding method’ for clothes and organised cabinets. ‘The challenge was to create a living space that feels nice and comfortable and that works intuitively, unlike many micro-living spaces that have hidden functions.’

The revamped house has been rented out to a young graphic designer who was fed up with flat-sharing. ‘He travels a lot, bikes around London and doesn’t have much stuff as he has everything on his laptop – no bookcases or record collection – so it totally suits him,’ says Tolstrup.

Micro homes are ideal for a younger generation unencumbered by possessions such as books and CDs, though hoarders might struggle. For them, Kondo, author of The Life-Changing Magic of Tidying Up, can advise on how to de-clutter homes for a holistic approach to pared-down, essential living.

The utilisation of space was the focus of the Mini Living installation at the 2016 Salone del Mobile in Milan, signalling the car brand’s move into lifestyle. The 30-square-metre apartment space was equipped with fold-out shelving modules that formed its walls. Shelves could be opened to create objects and functions, with a kitchen unit, a workbench and a music system integrated into the modules. Produced with ON design in Japan, its Do Disturb concept blurred the boundary between private and communal usage.

Of course, micro-living ideas have been around for decades – think of Jean Prouvé’s prefab structures in the 1940s and 1950s or Le Corbusier’s holiday cabin, Le Cabanon, on the Côte d’Azur. Prouvé’s influence is evident in Jean Nouvel’s prefabricated home, Simple, which was previewed in the Tuileries gardens during FIAC, France’s international contemporary art fair, last October. Made in collaboration with Revolution Precrafted, the 36-square-metre structure is designed to be flexible. ‘Everything is based on the system of the sliding panels and a kind of Japanese style so you can isolate the bedroom, the living room or the kitchen,’ says Nouvel, winner of the 2008 Pritzker Prize, of the modular layout.

What’s new now is the need for compact urban spaces internationally. Estonian company Kodasema has launched a free-standing structure that has a footprint of 25 square metres and is designed to be easily assembled and disassembled. ‘It was like thinking about car design – doing something that’s good quality in really small spaces,’ says Ülar Mark, one of the creators of the Koda. ‘We thought a lot about modularity and climate systems, setting our own standard using technology for lighting, solar-panel energy and humidity.’

To test Koda’s moveability, the team took it to Oslo, back to Tallinn, and then to London. ‘It takes approximately seven hours to mount it,’ says Mark, adding that a structure has been made for a British school and that 10 accommodation units are being manufactured for a parking plot in Tallinn’s city centre. ‘In European cities, there are more people living alone, so we need more smaller units that use less energy. Young people might live somewhere for a short period of time, yet want to be near the city centre and have concerns about sustainability.’

The same concerns can be heard across the Atlantic. According to Forbes, citing data from the Bureau of Labor Statistics, nearly 125 million Americans, or 50.2% of people over the age of 16, were single by August 2014. Single people make up more than half the population of Paris and 60% of households in Stockholm.

Inevitably, property developers have recognised a growing market. Stage 3 Properties, founded by brothers Andrew and Chris Bledsoe, has opened Manhattan’s first official ‘micro-unit’, Ollie at Carmel Place, a nine-storey building of which 40% is social housing. There are 55 studio and co-sharing apartments that range from 24 to 33 square metres, below the city’s minimum housing code standard of 37 square metres.

The initiative came about after former mayor Michael Bloomberg staged a competition in 2012 for a micro-unit development. Rental prices begin at $2,600 per month due to the prime location and the provided amenities, including multipurpose furnishings, such as sofabeds and coffee tables that can be extended into dining tables or desks, the internet, housekeeping, fresh linen and towels. There are also space-saving tech innovations, including lightbulbs that double as Bluetooth speakers. To encourage socialising among residents, a community manager organises activities, such as brunches and movie nights.

‘Many people were coming from the underground housing market, renting a closet or maybe having a bookcase dividing their sleeping area from their roommate’s,’ says Chris Bledsoe, who has rollouts planned for Pittsburgh, Jersey City and Los Angeles.

While Millennials represent two thirds of Ollie’s renters, the other third comprises commuters, couples, people who recently got divorced and Baby Boomers. ‘There’s a whole slew of Baby Noomers who are thinking of their retirement differently and want to enjoy restaurants, theatres and wellness centres rather than the golf course – this is the most powerful trend we’ve seen,’ Bledsoe says. ‘So we’ve pivoted away from the initial hipster advertising towards an image of being young at heart.’

Like the coworking industry, micro-living sees a paradigm lifestyle shift hinged on innovation. Yves Béhar, founder of Fuseproject, has teamed up with MIT Media Lab to create Ori, a smart furniture system inspired by origami. At the touch of a button, units glide into different possible configurations. A main furniture volume, with in-built wardrobe and storage space, has a slide-out bed to create a bedroom and a slide-out desk to create an office. Alternatively, the system can be pushed against a wall to create a larger living room. Sophisticated technology enables a dynamic fusion of physical and virtual living.

By contrast, other designers are coming up with mobile furniture systems that people can take with them. Nils Holger Moormann’s Kammerspiel is a cubic module that can be inserted into an apartment in order to ‘free up’ the rest of the space. With stairs leading to a mezzanine bed, the prototype includes space for a bike and beer crates, but it could also be used for a homeworking office or library. ‘Belongings can all go in the cube, leaving the apartment’s walls free for art,’ says Moormann. ‘In some micro apartments you can’t move the furniture system, but it could be a dream to take this with you with all your things inside.’

As more people delay putting down roots, demand for transformable, moveable furniture is growing. Take Pieter Peulen’s Flexit, a flexible furniture framework that is a hybrid of a bed, a desk and a wardrobe that can be moved around on wheels. The desk frame can also be lowered to create a double bed. Presented at IMM Cologne, in January, Flexit grew out of Peulen’s frustration with his student accommodation. ‘Aesthetically, it was inspired by scaffolding and the idea of easily screwing something together,’ says the Belgian designer. ‘If you’re doing co-working, you could connect the desks to form one big one.’

Other designers are making collections of small, versatile objects. Think of Daniel Rybakken’s Kila range for Artek, which includes coat stands made of tripod poles, and Gerardo Osio’s Nomadic Life range, inspired by Japanese culture and crafts, which is eminently portable. As more and more people choose to make their home in the city, architects and designers will need to come up with ever more imaginative ways of catering to this new generation of urbanites. Micro-living spaces that offer high-quality services and a sense of community and furnishings that make a virtue out of limited space provide a fascinating challenge for the design world.