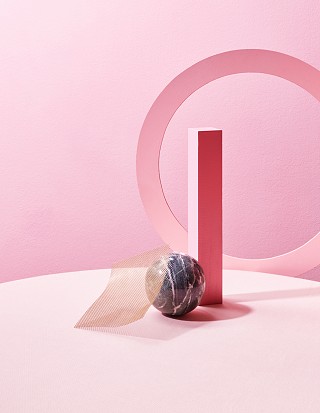 The colour pink has a rich history. Few colours have the same loaded connotations of femininity, rebellion and economic prosperity.

‘When I grew up, there were girls who liked pink and I wasn’t one of them,’ designer Ilse Crawford firmly told an interviewer in 2012. There are few colours that could elicit such deliberate distancing. So loaded is pink that it has been variously associated with femininity, homosexuality, prosperity, subversion and, of late, Millennials. What is it about this rosy hue that has endowed it with such complex semiotics?

Light blue and light yellow exist as variations of the colours they derive from – yet add white to red and you get a whole new colour. While red is one of the earliest colours to be named in most languages, pink only appeared in the Oxford English Dictionary in the 1840s. Its feminisation came later – starting with children. For most of the 19th century, young children wore white dresses or shades matched to eye colour, complexion or season. At the turn of the 20th century colours became gendered, but inconsistently: ‘Amy put a blue ribbon on the boy and a pink on the girl’ in Louisa May Alcott’s Little Women, published in 1869, yet a 1893 article in the New York Times advised ‘you should always give pink to a boy and blue to a girl.’

By the 1920s, pink’s strongest association was with ‘new money’. When Tom says of Gatsby in F Scott Fitzgerald’s The Great Gatsby, ‘An Oxford man! Like hell he is. He wears a pink suit,’ he is not calling Gatsby effeminate – he is questioning his social status. It took until the 1940s for the gender ‘rules’ to be settled, and Jo Paoletti, the author of Pink and Blue: Telling The Boys From The Girls in America, says it could have gone either way.

In 1949, after female students started wearing pink men’s shirts, Brooks Brothers launched a women’s version – it was a hit. Newly developed plastics meant almost anything could be made in pink. The 1956 Dodge La Femme automobile was pink inside and out, and came with a pink cape, boots and handbag. Donald Featherstone’s injection-moulded flamingos of 1957 enabled the aspiring middle classes to personalise their near-identical pre-fabricated homes. But it was Mamie Eisenhower, first lady to President Dwight D Eisenhower, who really propagated pink. She installed a pink bathroom in every military married quarters the couple lived in before her husband’s presidency. When she wore a gown studded with 2,000 pink rhinestones to the balls celebrating his 1953 inauguration, America went mad for the colour. The White House was nicknamed ‘the Pink Palace’ and of 20 million American homes built between 1945 and 1966, a quarter had at least one pink lavatory.

For some women, pink disarmed the men they were challenging – it was in a pink Austin-Healey Sprite, pink overalls and a pink crash helmet that racing driver Donna Mae Mims won 1964’s Sports Car Club of America National Championships. However, for many, pink palaces started to feel like prisons. When Lynn Peril named her 2002 book Pink Think, she identified a code of conduct: ‘Pink Think assumes that there is a standard of behaviour to which all women … must aspire,’ she wrote, dating the start of this groupthink to the 1940s. As men returned from war and wanted their jobs back, educated women were sold the idea that the role of wife and mother was equal to a salaried job, just different. College attendance for women dropped, the average age of marriage fell. ‘They learned that truly feminine women do not want careers, higher education, political rights – the independence and the opportunities old-fashioned feminists fought for,’ wrote Betty Friedan in The Feminine Mystique.

1950s film icon Jayne Mansfield might have claimed ‘pink was my colour because it made me happy’, but even women who seemed to have it all sensed something was missing. ‘Each suburban wife struggled with it alone,’ wrote Friedan. ‘As she made the beds, shopped for groceries, matched slip-cover material, ate peanut butter sandwiches with her children, chauffeured Cub Scouts and Brownies, lay beside her husband at night, she was afraid to ask even of herself the silent question – “Is this all?”’

It’s no wonder that the next generation shunned and subverted pink. In the unisex era of 1965 to 1985, second-wave feminists became parents as child development theorists recommended bright colours over pastels. Pink was out. By the mid-1970s Sears carried no pink clothes for toddlers. Others set out to reclaim the colour. Vivienne Westwood and Malcolm McLaren branded their famous King’s Road clothing boutique with a four-foot-high pink rubber sign that read ‘sex’ in capital letters. Zandra Rhodes dyed her hair hot pink. Poignantly, the American gay community appropriated the downward-facing pink triangles homosexual prisoners were forced to wear in Nazi concentration camps – firstly as a symbol of defiance against rising homophobia and then, turned upwards, as a precursor to red HIV and AIDS ribbons. In February 1974, The Body Politic ran a pink triangle on its cover, and Americans and Canadians began wearing them in solidarity. Recent feminist activism – from the pink pussy-hat marches after Donald Trump’s presidential inauguration to the logo of For All Womankind (raised fists on a pink background) – has followed suit in reclaiming pink.

And now, of course, there is ‘Millennial pink.’ There is disagreement over exactly what it is: bubble gum, rose gold and dusty shades are all contenders. The moment that it all started is contested too. Did the pink façade in Wes Anderson’s 2014 film The Grand Budapest Hotel spark its popularity? Was it Pantone’s selection of Rose Quartz as one of 2016’s Colours of The Year, or the 2016 launch of the rose gold iPhone 6s, or 2017’s overwhelmingly pink Milan Design Week? Even its name is contested – Tumblr pink and Scandinavian pink are alternatives. Whatever the details, a whole generation has claimed – or been branded with – a colour, and that has to mean something.

Generation Y is not just shunning ‘pink for girls and blue for boys’, it is rejecting the concept of binary gender altogether. According to the 2015 Massive Millennial Poll carried out by Fusion, half of those aged 18 to 34 see gender on a spectrum. Institutions are responding by providing the option of Mx alongside Mr, Miss and Mrs. Even Oxford University’s rules on sub fusc (formal clothing) now allow all students to choose trousers or skirts. ‘Everyone, really, is non-binary,’ wrote the Guardian’s Hadley Freeman. ‘No one’s a wholly pink butterfly or blue car onesie.’ Pink has never been so popular. What was once a brave choice for men (see JC Penney’s ‘tough guys wear pink’ slogan T-shirt) has become the default for those born between 1982 and 2002 – Barbara Ellen has called it ‘hen-party heroin for the masses.’

It might be some time before pink becomes nothing more than pale red, as it starts to lose its gender connotations. However, it will evolve, enabling more wide-ranging applications – particularly in combination with other colours. The addition of brass gives it a grown-up, sophisticated edge; while alongside Greenery, Pantone’s 2017 Colour of The Year (reflecting another Millennial trend for houseplants and succulents), it is fresh and youthful. As it becomes more chameleon-like, pink will start to throw off the shackles of its former associations, free to take on new meanings. The only question that remains is what these might be.