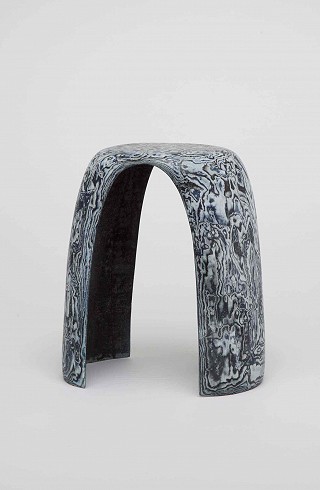 Over-consumption of scarce resources is driving designers to reclaim materials from waste. As well as offering environmental benefits, these innovations signal a shift in our relationship with materials, away from a linear take-make-discard model to a more cyclical approach in which designers harvest alternative raw goods from industrial and domestic waste streams and landfill.

Jorges Penadés recycles leftovers and offcuts from the leather industry, which discards more than half of the animal hides it uses because they are not considered good enough to use as a primary material. Exploiting the strength and beauty of apparently worthless leftovers, Penadés binds scraps of leather with natural bone glue to create a robust material that he uses to make furniture. The leather is sourced from fashion industry waste streams, where imperfect hides as well as scraps procured in pattern cutting are abundant. This leather is shredded and pressed into an iron mould, soaked with bone glue, compressed and left to set. The glue binder is fully biodegradable, making the finished material entirely recyclable. The moulded leather forms can be reprocessed and remoulded. Nothing is lost; everything is reusable.

Material designer and consultant Sophie Rowley plays with the perception of materials. Regarding waste streams as ‘a future quarry, a starting point rather than an end point,’ Rowley mines ‘non-virgin materials which already have had a life’. Drawing on the aesthetics of natural processes, such as the layering of rocks and their transformation through erosion, she re-engineers ‘hyper-common’ waste materials, such as denim, paper, styrofoam or glass to produce new designs in which random patterns simulate the aesthetic of natural materials such as wood or stone, elevating the original resource until it is no longer recognisable. Rowley’s Bahia Denim material, for instance, is creating by layering denim offcuts and bio-resin over a mould. Once dried, the surface is carved away and sanded down, revealing an intriguing marbling – the material takes its name from a Brazilian blue marble which it resembles.

Taking an unconventional approach, designers at paper producer GF Smith have created a range of paper that they hope to eventually discontinue. With the Extract paper range, they aim to combat the vast amounts of waste caused by our takeaway coffee habit. According to GF Smith, in the UK alone around seven million paper cups of coffee are consumed every day, and less than one in 400 is recycled. Infusing paper with plastic to make disposable cups durable, once considered a smart, problem-solving innovation, has become an environmental disaster. To tackle the issue, GF Smith has partnered CupCycling™ by James Cropper, using innovative technology that means around 90% of each cup can converted back into paper fibre, to make Extract paper. The plastic element of the cup, the remaining 10%, is also reused, so the process is resolutely zero waste. However, GF Smith remains hopeful that this intervention itself will one day be rendered redundant, stating ‘Ultimately, smart design will create a sustainable solution to the challenge presented by coffee cups and, if we’re successful, we’ll be able to discontinue Extract altogether.’

UK-based Alusid’s SilicaStone is a sustainable, durable surfacing material. SilicaStone has the appearance of natural stone, but is made from 100% recycled material, including glass from old televisions and repurposed porcelain – redundant home electronics are an abundant and under-utilised contemporary waste stream. Alusid’s ethos of sustainability permeates the entire production process, from sourcing to ultimate reprocessing. No resin or cement is used to bind the material and all production waste from cutting and polishing is reintroduced to the manufacturing process, so nothing ends up in landfill. All Alusid materials can be reprocessed at the end of their useful life, making them entirely cyclical.