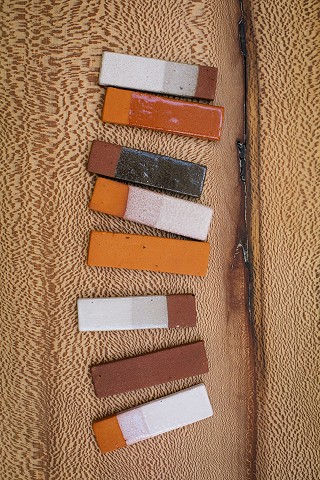 Traditional as radical, with Sebastian Cox

The eponymous founder and co-director of Sebastian Cox Ltd stands in the midst of his bustling furniture workshop, filled with people making everything from one-off commissions to a complete interior for a high-street retailer, looking up the stern portrait of William Morris that watches over the scene.

‘I often ask myself,’ he says, ‘what William Morris would think if he turned up here today.’ He pauses for a moment. ‘I hope he would think we were on the right track.’

Morris, the famous 19th-century textile designer, writer, socialist and proponent of the Arts and Crafts movement, is known for his oft-quoted maxim ‘Have nothing in your houses that you do not know to be useful or believe to be beautiful.’ He campaigned for craft skills, ‘art for all’, honest construction, better working conditions, and references to nature in all things – his most famous wallpaper designs depict birds, plants and flowers, which he hoped would create calming atmospheres in people’s homes.

Cox and his wife and co-director Brogan are taking these ideas a step further. Their motto ‘traditional as radical’ is taken from the title of Cox’s master’s thesis (he studied furniture design at the University of Lincoln) and references the couple’s belief that the answers to some of the 21st century’s biggest problems can be found in the past. The pair use a range of materials that would be familiar to Morris and even to the medieval craftsmen he was inspired by. ‘If you were going to invent the perfect material of the future, you would want something strong, light and renewable that could be made anywhere on the planet,’ says Cox. ‘If you were being really ambitious, you might even ask it to absorb carbon dioxide and emit oxygen. It sounds like a tall order, but it already exists – it’s wood.’

If their raw material is medieval, so too are the colours they use. ‘Our work is mostly brown,’ laughs Cox. ‘Colour poses a problem for sustainability – it dates more quickly than anything else, which is why we haven’t really used it yet.’ But Brogan Cox’s green Barker table, launched at Decorex, signals a change – working with natural oils and dyes, she is developing a colour palette to suit their materials. ‘In the medieval era, colour was special and rare, and that’s how we will use it,’ says Cox. ‘Colours from nature are the only ones that never really go out of fashion.’

‘If you were going to invent the perfect material of the future, you would want something strong, light and renewable that could be made anywhere on the planet. If you were being really ambitious, you might even ask it to absorb carbon dioxide and emit oxygen. It sounds like a tall order, but it already exists – it’s wood.’

But Sebastian Cox Ltd is about more than making furniture that William Morris would approve of. Brogan Cox’s marketing background at Good Agency and her time at the American Hardwood Export Council laid the ground for the co-director role she stepped into full time in 2017, having previously been involved behind the scenes. ‘When I grilled Sebastian about the company’s vision, it quickly became apparent that this was about something much bigger than furniture,’ she says. ‘I remember saying, “You are aware that what you really want to do is change the world, aren’t you?”’ Although Cox will only nod sheepishly in agreement, this aspiration is in evidence across the business.

Following the Morris ethos, furniture made by Sebastian Cox Ltd is economical in its design and made using only natural materials. This means that you can see how it is made – and therefore how to repair it – but it also adds longevity in other ways. ‘In his book Sustainable by Design, Stuart Walker says that if you can “read” an object, you will form an emotional connection with it,’ explains Cox. In his studio, all tasks are shared, and the team – the majority of whom are currently female – are all paid the London Living Wage. New production techniques, combined with clever design, even enable some collections to be priced in line with (high-end) high-street retailers, making them accessible – something the Arts and Crafts movement aspired to, but never really achieved.

But where the Coxes are really taking Arts and Crafts thinking further than its original exponents is in their relationship with nature. Whereas Morris and his followers appropriated the aesthetics of nature, projects such as Hewn and Mycelium + Timber feel more like symbiotic collaborations with the great outdoors. Hewn features coppiced hazel branches left ‘in the round’ with their bark intact. ‘Designers need their own version of the Hippocratic Oath – we should be extracting materials from the natural environment in a way that benefits that environment,’ says Cox. ‘There are few examples where man’s intervention with nature is constructive, but coppicing is one of them.’

Coppicing, something Cox has been familiar with since watching charcoal burners work his family’s 300-year-old coppice aged 11, involves cutting one fourteenth of a woodland’s trees back to their stumps every 14 years. The felled sections regrow, resulting in a biodiverse ecosystem in which flowers, insects and birds thrive. British woodlands have been managed in this way for thousands of years – and new research suggests that the process echoes the way in which large mammals would have once knocked over trees while foraging for food. However, a decline in woodland management, owing to the falling value of timber, has seen a parallel decline in biodiversity. ‘I want to put the value back into woodlands by making objects from coppiced wood that people want to buy,’ says Cox.

Mycelium + Timber takes the idea of collaborating with nature further, using natural processes not only to source materials, but also to construct products. Inspired by some hazel fused together with fungus that Cox found in the woodland, the collection of lighting, created in collaboration with Ninela Ivanova, is ‘grown’ in moulds from the vegetative part of the Fomes fomentarius fungus and scrap willow wood. Once dried, the suede-like mycelium is entirely stable, and Cox predicts lifespans akin to wooden products. Lead times are in line with those of the high street, and once scaled, prices will be too. Far from the ‘mere machines’ that Morris feared workers would become, this process effectively turns them into chefs or gardeners.

At the end of their lives, the Mycelium + Timber lights can be rendered compostable with the simple addition of water. ‘Because they have come from the earth, they can be returned to the earth,’ says Brogan Cox, acknowledging the circularity required for true sustainability that many designers – appalled by the idea of their products being disposed of at all – cannot bear to think about.

In answer to the question Cox posed under that stern portrait: if William Morris were here, there is no doubt that he would be very impressed indeed – to see his legacy not only continued, but also built upon and enriched with such thoughtfulness and vision.