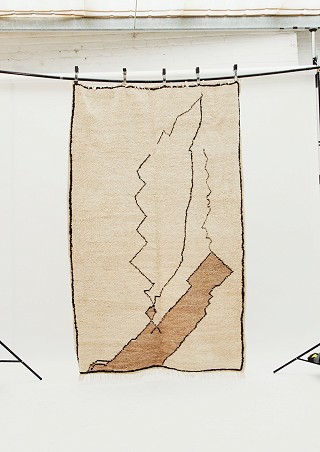 Consumers are increasingly buying into the heritage of products as much as the pieces themselves, but we may not always be seeing the whole picture. Moroccan artisan weavers’ collective Anou offers a fresh alternative to traditional cultural clichés – and a challenge to vested market interests.

Take the beguiling story of sabra, for example – the trendy, vegan eco-fibre beloved of lifestyle bloggers. The cactus-derived ‘silk’ is harvested in the Saharan desert by nomadic Berber women, dyed in a spectrum of soft colours, then hand-woven with traditional motifs using a process that has remained the same for centuries. With such a romantic backstory, ‘sabra products are incredibly popular because they embody the imagination of what people perceive Morocco to be,’ observes Anou founder Dan Driscoll.

Imagination is the key word here. In reality, the sabra narrative took off only in the 2000s. Suspicious because none of the hundreds of Moroccan weavers who work with Anou had made or posted sabra products on the collective’s platform, Driscoll traced the supply chain back to source. An inspection of packaging labels and material tests revealed that the fibre was in fact rayon. Distributors had no qualms about admitting that the yarn wasn’t produced in Morocco: it was just that no-one had asked before.

The truth behind sabra exposes how the desire for artisanal products with meaning leaves us vulnerable to seduction by fake stories of provenance. For Driscoll, it illustrates the issues that are systemic in an artisan economy largely controlled by middlemen, who retain 96% of the final selling price. As he points out, ‘these narratives that help sell products are radically detached from the reality of who these people really are.’ The solution is an artisan-run collective that puts power in the hands of the makers at every stage, from design to distribution.

Anou enables artisans to sell direct to customers worldwide using a bespoke, language-free interface. Workers receive 80% of the proceeds and the rest is ploughed back into the platform and training. Six years on, Anou has founded a materials supply company, trains artisans in management as well as production, and has lobbied for reform of outdated regulations that, in favouring middlemen over makers, reflect a pre-digital market. This has established the skills, market access, influence and financial stability to enable makers to shape the future of an artisan economy ‘beyond fair trade’.

Anou doesn’t just manage production and logistics – it also puts workers in control of their image and story. The collective’s online store is populated with weaver’s photographs of their hand-loomed rugs against the bright skies of the Atlas Mountains or in dusty village streets. These pictures are accompanied by biographical pen portraits and the platform connects products with the places they are made, as well as with the personal stories of their makers.

Design becomes central when consumers buy into the story behind a brand and here too, Anou takes a distinctive tack. Its collaboration with London-based designer Sabrina Kraus López, to equip makers with the tools to create original designs, subverts received notions that artisans either preserve unchanging heritage – what Driscoll calls the ‘museumfication of craft’ – or are mere fabricators for designers who reinterpret traditions in a contemporary vein.

In 2014, López collaborated with six Amazigh weavers in the Ait Bouguemez valley to develop a collection of limited-edition rugs. She lived and worked with the artisans, learning their techniques and encouraging them to take inspiration from their surroundings, and introduced them to basic design methods such as collage, watercolour pencils and outline design. Rather than designs imposed by an outsider’s eye, the results are abstract riffs that play on language and images of community and landscape.

Four years on, López continues to work very much as facilitator rather than designer and has found that different cooperatives reveal distinct design identities. For example, Fatiha Ait Ouagadir, who is part of Cooperative Tifawin, has discovered she has a brilliant eye for colour. Weaver Halima Aissaoui’s designs incorporate symbols from her local environment, such as sheep, looms, radios, tools and other women. The richness of Anou is that there’s no forced homogenous aesthetic but multiple, richly nuanced identities.

It takes sensitivity and humility to work this way. López, who has an American father and a Columbian mother, grew up in Switzerland before studying in Milan and London, and is well versed in crossing cultures. She was introduced to Anou after her collaboration with Peruvian backstrap weavers was spotted by the British Council.

There is always, of course, a filament of continuity in any craft tradition and López explains that rug designs have helped preserve Berber culture. Following the Arab conquest, women wove hidden messages to their imprisoned husbands into rugs, which kept the Tifinagh script alive. The idea of a ‘pure’ Berber heritage, preserved by artisans, however, is a chimera dreamt up by marketeers.

One popular rug design, commonly regarded as traditional, was, in fact, designed by a French artist in the 1990s, and many of the concepts that have come to define Moroccan craft were formalised during the French protectorate era, from 1912 to 1955. ‘It’s not really the heritage of these artisans, it’s what the perceptions of outsiders say their heritage should look like,’ Driscoll says. Embodying the belief that traditions must be frozen, these designs are turned into commodities and, ‘if everyone makes the same thing, middlemen can get away with super-cheap labour costs’, he notes.

The antidote to all this is to recognise that culture is always changing and evolving – and craft is no different. ‘For the artisan community to survive, they need to be pushing the culture forward,’ Driscoll explains – and this is key to Anou’s vision of a resilient, dynamic future.

Anou seems to be genuinely doing something distinctive. ‘The fact that artisans are at the core of it, that’s what makes it so special. I haven’t experienced that anywhere else, where they’re given this opportunity,’ López says. It can be hard, though, for that distinction to be heard against a buzz of fair-trade rhetoric.

Driscoll has a vision: ‘Morocco could lead globally in terms of design of artisan craft.’ This may well be so, but it will depend on a contemporary, dynamic understanding of Berber identity, not one as riddled with misconceptions as a story spun from cactus silk.