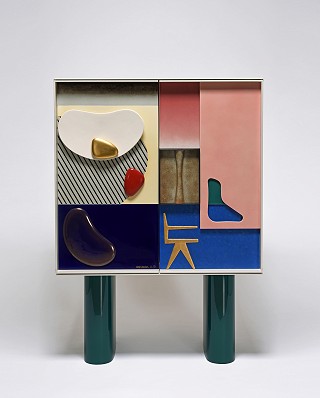 A CULTURE OF COLOUR: DOSHI LEVIEN

Nipa Doshi is showing me one of the pages from her most recent sketchbook, where a painstakingly gouache-rendered reproduction of a Picasso painting from this summer’s Tate Modern show is surrounded by pages of handwritten notes. Doshi, co-founder of design studio Doshi Levien, explains that, rather than simply taking a photo, she uses this process as a more active way of learning about colour mixing and composition. This analogue way of working and analysing feels like a largely forgotten skill in today’s fast-paced, digitally dominated world.

This intellectually rigorous approach, underpinned by a rich knowledge of design and cultural history, translates into every Doshi Levien project, whether it’s designing rugs for Nanimarquina, creating furniture pieces that celebrate the work of modernist master Le Corbusier, or developing colour and material palettes for companies such as Kvadrat and Kettal.

The design studio was founded by Doshi and Jonathan Levien, who met while studying furniture design at the Royal College of Art (RCA). Doshi is originally from India, where she completed her first degree in industrial design at the National Institute of Design, Ahmedabad. The school was founded in the 1960s by the Indian government, with the assistance of the Ford Foundation and the Sarabhai family, following recommendations made in a report by Charles and Ray Eames. It aimed to teach the principles of modernist and Bauhaus era design, and this is a thread which runs through much of the contemporary duo’s work.

Doshi describes the college as very much an ‘utopian oasis’, far removed from the reality of the city outside, where 600-year-old temples and art deco buildings sat alongside modernist masterpiece buildings by Le Corbusier. She explains that this plurality existed in her world from early childhood. ‘From a very young age, I loved the visual culture of India and I was really in tune with the cities that I grew up in. I lived in a city where there was a paper factory opposite our house and a tea seller at the end of our street, and we lived in a beautiful dusty-pink art deco house. I grew up with this cultural and religious plurality, which was incredibly beautiful to me.’

It is this house that Doshi believes inspires the studio’s frequent use of a ‘dirty, dusty pink.’ ‘It’s amazing how influential colour actually is – that it represents something so deep for you,’ she reflects.

When Doshi and Levien met at the RCA, the pair found that each had something to offer the other, with Levien’s craft skills as a cabinetmaker complementing Doshi’s sense of design. They left the RCA initially to work for different companies; Levien going to Ross Lovegrove and SCP, and Doshi to David Chipperfield Architects. When the duo came to set up their own studio, one of their early formative projects was creating cookware for Tefal, inspired by authentic cuisines from countries such as Japan, China, India and Spain, but rendered in very modern materials. Doshi believes this project set the manifesto for the new studio, in that it brought together elements of industrial design, craftsmanship, storytelling and fine precision making.

She explains it was at this stage that she returned to her love of colour and textiles, subjects she had previously avoided due to her perceptions of them as too feminine. She also rediscovered her identity as an Indian designer. ‘I missed my country and culture, the spontaneity, all the fabrics and makers, the sensuality of the streets,’ she recalls. ‘I also realised that you had to know the cultural context you were working in as a designer and for me this was India. It was just there.’ Of her approach to colour, she says: ‘There is a world out there where people have created immense beauty. Our references have to be from many different places, not just from the narrow world that we inhabit. I truly believe in a plurality of culture.’

Doshi Levien’s most recent projects include undertaking colour direction for leading textile brands. Work for Kvadrat on the Raas and Lila collections involved painting hundreds of colour cards by hand until the exact shades required were created. Doshi describes the project’s finished colour palette as soft and romantic. The collections were inspired by a range of diverse influences, spanning Royal Indian miniature paintings, traditional Chinese ceramics, fine porcelain maker Sèvres and murals by Le Corbusier. The resulting fabric’s slub yarn resembles a high-tech ikat, with a top colour seemingly scored through to reveal another colour underneath – for example, a lavender appears with a dark red background, while a maroon is underscored with pale yellow. The project signalled a ‘big leap’ in the studio’s approach to colour, due to unusual combinations such as these.

Outdoor furnishings company Kettal recently approached Doshi Levien to develop a rich and varied colour and materials palette that stands out from the multitudinous collections of outdoor furniture rendered in safe neutrals. For this project, the design studio looked to nature – to the earth, sky, forest, and water – to develop a palette that would sit well outdoors and could be mixed and matched by designers such as Patricia Urquiola and Jasper Morrison.

Perhaps the studio’s clearest reference to Doshi’s Indian roots is the studio’s Rabari rug collection for Nanimarquina. The design uses pile to form the jewel patterns that sit on top of the woven rug and was inspired by traditional embroidery techniques. The final design, sparse in colour use, references the works in progress that she would often see at her aunt’s clothing workshop, where groups of women would sit and work together on a single fabric.

When Sèvres approached the design studio, the duo saw an opportunity to celebrate the work of Le Corbusier, who was commissioned by India’s prime minister in 1952 to design the modernist city of Chandigarh. The resulting piece features a collaged porcelain façade of ‘utopian fragments’ of the city, from Pierre Jeanneret’s renowned Chandigarh chair to the bean shape used in a Le Corbusier tapestry at the city’s Palace of Assembly building. ‘It is a symbol of love and devotion to India,’ says Doshi.

The designer admits to spending a ‘mad’ amount of time deliberating over colour use and compositions. Doshi works with paint in her hundreds of sketchbooks, using ‘memories of colour’, until she finds the right shade. ‘I find working with colour quite tiring – the possibilities are endless, but to get the colour right is very difficult. I’m always worried that what I’ve produced is completely ghastly! But it comes down to your use of colour, it’s very personal and subjective.’

Up next for Doshi and Levien is a series of exciting new projects – some they can talk about, some they can’t. ‘Textiles, colour and materials are definitely things that the studio is now more and more involved with,’ says Doshi of ongoing projects for Kvadrat and Kettal. The studio is also working with high-end luxury brands and will continue its relationships with labels such as Moroso and B&B Italia. Whatever the project, colour will always have a key role. ‘On each project you have to push your idea of colour, otherwise, for me, it wouldn’t be challenging or interesting,’ says Doshi. ‘Finding beauty in unexpected places – that’s the core of how I look at colour.’