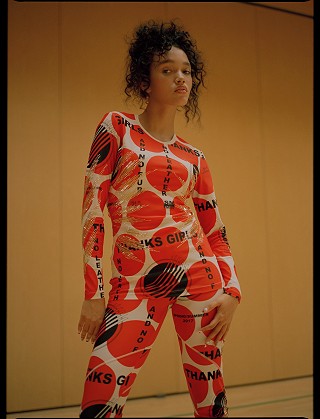 With so many egregious offences against women coming to light across the film, art and publishing industries, one thing is for certain: women creators are no longer playing nice or staying quiet. In fact, they are rushing to fill the cultural vacuum left by their disgraced male predecessors with powerful work. More than ever, women are taking back their own images, stories and narratives in order to create impactful and nuanced work about women, by women. From top-grossing actresses publicly demanding equal pay to underground digital platforms that let women’s imaginations run wild, women are demanding to be heard and they are using the vehicles of art, design, film and media to do so.

Although the issue of representation is nothing new – the Guerrilla Girls have been protesting about the lack of female artists in major institutions for over 30 years – we are in a moment where women no longer feel as though they need to wear masks in order to call out the injustices they see. Instead, they are speaking out and stepping behind the lens to tell their stories and crucially, using their star power to build credibility for campaigns such as #MeToo, #TimesUp and #NotSurprised. Women are pushing to level the playing field in film, television and publishing by becoming the purveyors of culture: making films with all-women crews, putting together shows by women artists and creating platforms to tell women’s stories. The stories are already there – now it’s time for the rest of society to embrace and empower the Female Gaze.

It’s fitting that film has become one of the most outspoken industries to start pushing for visibility and access for women, as it was from film we began to understand more clearly the Male Gaze, a term coined by feminist film critic Laura Mulvey in her 1975 essay Visual Pleasure and Narrative Film. Looking to canonical figures such as Alfred Hitchcock or Marilyn Monroe, Mulvey outlines the ways that women have been historically used as tools or objects to project male desire upon, rather than subjects with their own desires and agency. The Female Gaze is thus a reclamation of women’s power to see and be seen on their own terms – outside of heterosexual desire or societal constraints. It allows women to break out of the confines of objectivity and start creating their own narratives.

The reason this is so important now, after decades of conversations around the topic, is because there is still a tremendous lack of meaningful representation of women in culture and media – both in front of the camera and behind it. Greta Gerwig drew attention at this year’s Academy Awards for being only one of five women to be nominated for best director in 90 years. Which is not surprising, as only 4% of top-grossing directors are women. Rachel Morrison also made history this year when she was nominated for best cinematography for Mudbound –the first time a female director of photography has ever been nominated in this category. This kind of recognition is important, but there is still more to be done before the awards season rolls around again, to ensure women’s stories are being told, and being told right.

Woman as subject, creator and consumer

In order to tip the balance, we need women at every stage of the creative process, from creation to consumption. Zoe Lister-Jones made it a point to use an entirely female crew for her film Band Aid, citing the need for ‘a place where women, in a collective, get to do work that has otherwise been difficult for them to break into.’ And photographers such as Leonn Ward and Carlota Guerrero have been pushing the fashion industry forward by shooting and directing campaigns that show women in more nuanced and complex ways. Guerrero gained recognition for her artwork collaboration with Solange Knowles on A Seat at the Table, which intricately crafted a defiant portrait of the musician and her unique aesthetic, highlighting both the power and vulnerability of black women.

Magazines such as Riposte, ‘a smart magazine for women’, and Typical Girls, which has been lauded for ‘proving there is no right way to be a woman’, have created powerful platforms to showcase work for and by women and people of colour. These magazines are just a few examples of the many publications moving away from stereotypical ‘women’s topics’ like beauty, celebrity, diets and relationships, and focusing on the politics and aspirations of their smart, diverse audiences, who are hungry for more engaged content. Riposte’s issue #9 features ‘honest and upfront conversations with a cast of powerfully brilliant women’ including trans activist and writer Janet Mock, director Melina Matsoukas, graphic designer Sheila Levrant de Bretteville, Maria Alyokhina of Pussy Riot and fashion designer Peggy Noland. In her feature interview, Matsoukas, who has recently worked on HBO’s Insecure, says, ‘We’re trying to tell our stories. If you relate to that, then great. And if not, then maybe that’s also great because you’ll learn something that you don’t experience all the time.’ This rise in campaigns and platforms to connect and represent women across industries is turning the tide in supporting the creation of media and culture by women.

You can’t be what you can’t see

Social media continues to serve as a powerful platform for historically marginalised faces and voices. For example, many young women artists – especially women of colour – are starting to forego completely the gallery institutions that have historically under-represented them and instead use Instagram as a platform for their work. ‘I illustrate a lot of Asian women in my work and I know people like that they see themselves represented, that’s very important to me,’ says artist Manjit Thapp, who has made a name for herself with close to 100,000 followers on Instagram, as of March 2018, but no traditional gallery representation.

Not only do so many more young women have access to more diverse content today, but they also have the access and agency to start making it their own. Hashtag campaigns have also been instrumental in spreading awareness and promoting women-owned projects. ‘I realised that, if I wanted to be seen in any type of light other than ‘sexy,’ I’d have to take a real role in creating my image,’ says photographer Amanda de Cadenet, founder of Girlgaze TV, on the motivation that sparked her to launch an Instagram account featuring images for and by young women. In just under a year, #girlgazeproject grew into a full-blown digital platform, garnering attention from industry giants as supporters and contributors along the way. Visibility is a huge step towards equality and respect, and social media platforms are allowing women to stand up and make the content they are not finding elsewhere.

The future of representation is female

After years of talk, it is now time for the creative industries to finally take action. Brands and studios are empowering women to create for other women. This year Nike launched the Re-Imagined Icons collection, which asked 14 female designers to re-imagine classic Nike trainer styles for women. Global companies such Walmart and Samsung launched ad campaigns at the Oscars, highlighting work by diverse groups of women, including Dee Rees, Issa Rae, Melissa McCarthy and Constance Wu, proving that the Female Gaze is not simply a trend, but a force to be reckoned with. As Rees says in Samsung’s Do What You Can’t campaign, ‘make them regret the day they passed on you.’ As more and more women get behind the lens and become a part of the process, the Female Gaze will continue to gain momentum, and the voices of women and people of colour will continue to be heard, supported and celebrated in mass media and culture.