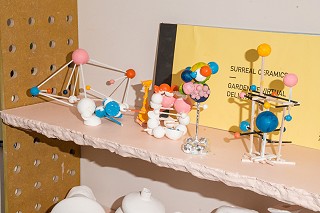 As arts education is squeezed from the syllabus at every level and young people from economically disadvantaged backgrounds are demonstrably less likely to take creative subjects even where they are offered, STORE, the organisation behind STORE STORE, is promoting access, openness and inclusivity in creative education.

STORE STORE is a design shop and workshop space organised by STORE located in Coal Drops Yard, London. STORE members, Stine Keinicke and Kevin Smeeing, along with James Shaw and Kevin Green manage a programme of workshops in the space where students and members of the public alike work with contemporary designers to learn art, design and making skills. Objects designed by students in STORE’s after-school-club are also sold in the space, with royalties going to a cause of the students’ choice.

Peering in through the window of STORE STORE in Coal Drops Yard, one of London’s newest retail developments, you’d be forgiven for wondering what on earth is going on inside. Having meandered through a predictable mix of too-cool-for-school high-end stores such as Tom Dixon, Aesop and Cos, you might be suddenly confronted with an array of oozy extruded plastic candlesticks or a bunch of teenagers taking a crash course in glassmaking.

As arts education is squeezed from the syllabus at every level and young people from economically disadvantaged backgrounds are demonstrably less likely to take creative subjects even where they are offered, STORE, the organisation behind STORE STORE, is promoting access, openness and inclusivity in creative education. ‘There are many arguments supporting this, from the fact that the creative industries are a major contributor to the UK economy, to the impact the arts have on wider culture,’ says James Shaw, one of the designers behind the initiative. ‘But one of the main things we are keen to work on is making sure that creative education is open to all, bringing in a diverse range of voices.’

The project evolved from an opportunity offered to some young artists, architects and designers in 2011. ‘We were asked to take over Store Street for the Bloomsbury Festival and decided to create 20 installations to retell the story of Icarus,’ explains founding member Kevin Green. ‘We invited more than 40 architects and artists to work together on each installation and subsequently we were given an old warehouse on Alfred Place for two years. We held lectures, workshops and readings, as well as a residency programme, an architectural summer school, and a large Arts Council-funded art show.’

'There are many arguments supporting [arts education] from the fact that the creative industries are a major contributor to the economy, to the impact the arts have on wider culture.' James Shaw, founding member of STORE

Over the eight years that followed, the loose association of artists, architects and designers that coalesced around Alfred Place and subsequent venues across London, formalised into community-interest company STORE. It now comprises three core elements: an educational programme of art and architecture courses; a wide-ranging programme of public events and exhibitions; and a socially engaged design practice.

All of these are driven by a passion for encouraging London-based students from low-income backgrounds to think about pursuing creative subjects at higher-education level. ‘I was lucky enough to have an amazing art school education, which was extremely nourishing, mind-opening and really formed the basis for my entire practice today,’ says Shaw. ‘But I came in at the tail end of university being affordable. In each of my courses – foundation, degree and then master’s – my year group was the last not to be paying large fees. I got the last taste of the freedom to follow my choices without having to worry about debt. Today’s young people not only have to weigh up the monetary value of an education that shouldn’t be valued in monetary terms, but also face the fact that arts courses are being massively squeezed in schools across the UK.’

'Today's young people not only have to weigh up the monetary value of an education that shouldn't be valued in monetised terms, but also face the fact that arts courses are being massively squeezed in schools across the country.' James Shaw, founding member of STORE

And then there is STORE STORE. Described by the Guardian’s Rowan Moore as an ‘Instagrammable visual hit’ designed to ‘soak up some of the surplus value sloshing around the credit-card accounts of the modern well-heeled urbanite’, Coal Drops Yard isn’t the obvious place to house a design shop populated with objects designed and made by after-school-club students with royalties donated to good causes. But the venture is underwritten by property developer Argent and making space for such initiatives was always part of the plan. ‘Part of the original vision for Coal Drops Yard was that it be a place where things are made as well as sold,’ says Vickie Hayward, Coal Drops Yard cultural consultant. ‘I saw a stool James Shaw had made with some of the STORE students and it was one of those moments when I knew immediately that we would be working together. STORE’s designers are using processes that are pushing material and making forward, and it is an amazing privilege for Coal Drops Yard to provide a home for that. It’s like having a tiny piece of the future on site.’

There are now 29 artists, designers and architects involved in running STORE and the challenges of co-ordinating such a large group of people – and such a wide range of activities – are surmounted at a monthly dinner. ‘It’s not easy,’ laughs Green. ‘We have always done everything in our spare time; we spend our weekends running the various programmes and spend most evenings in the workshop making and prototyping things. Different people take ownership of different projects, and over the years, we have slowly found – and are still finding – a way to organise such a large group so everyone can have their autonomy, but with moments where we all move forward together.’

And moving forward they are. Not satisfied with their already impressive achievements, the artists, designers and architects behind STORE – like so many of their generation – want to bring about positive social change and have big plans for more ways they can leverage the platform they have developed to do so. ‘We are ambitious about what the organisation can do,’ says Shaw. ‘We strongly believe in promoting arts education to all and promoting skills in art and design, and we would love to continue our engagement in the public realm. We have lots of big ideas, from setting up a permanent school to building a rural centre for the teaching of making skills.’ Right now, STORE might only represent a tiny piece of the future, but if progress continues at this pace, it’s a piece that is going to grow.