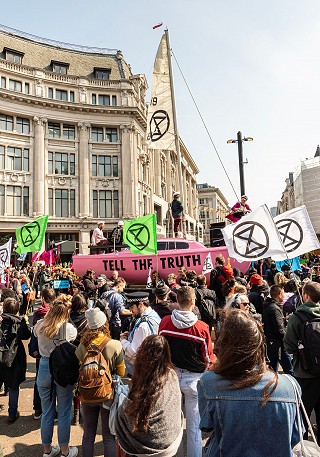 THE COLOURS OF RESISTANCE

Repeated colour is visually spectacular, unifying a disparate crowd. Extinction Rebellion harness colour as a powerful tool to create a shared experience that communicates life and hope in the face of an urgent, era-defining existential threat.

The menacing scarlet flags flown by the earliest pirates symbolised a group in revolt against all the laws of the land. Skip forward to 2012 and students in Toronto are pinning red felt squares to their clothes as part of a rebellion that led to a freeze in tuition fees. Colour – here in its most basic form – has long been an irresistible protest tool.

It’s a quick signifier of allegiance – think of the green, purple and white of the militant British suffragettes’ sashes and ribbons versus the red, green and white of the non-violent suffragists. It can subvert, as in Shepard Fairey’s quasi-political campaign-style reds and blues, or Sister Corita Kent’s adoption of FMCG-style branding to preach love and anti-consumerism. It can tap into deep emotional and cultural significance. Green, associated with paradise in Islam, underpinned Iran’s 2009 Green Movement. The black attire worn at the 2018 #TimesUp Golden Globes protest suggested collective mourning, as did the black worn by Democrat women at President Trump’s first State of the Union address.

It’s unsurprising in the advertising-saturated post-millennium years that many grassroots revolutions, from Ukraine’s Orange Revolution to Kuwait’s Blue Revolution to Georgia’s Rose Revolution, where protestors carried red roses, have sought simplicity and uniformity in a colour, rather than an image or a slogan.

Repeated colour is visually spectacular, unifying a disparate crowd. When Jayna Zweiman and Krista Suh designed the Pussyhat, they wanted to turn the 2017 Women’s March into a ‘sea of pink’, an overwhelming symbol of female solidarity against the newly inaugurated president and his ‘grab them by the pussy’ toxicity. Although they faced backlash for the choice of colour – not all labia are pink and indeed not all women have labia – thousands of women knitted and wore the open-source pattern, and an example was put on display in London’s Victoria and Albert Museum.

Colour is central to the visual strategy of UK-based environmental movement Extinction Rebellion (XR), which has redefined of the look of eco-activism. Demanding the reduction of carbon emissions to zero by 2025 and that the government ‘tell the truth’ about the extent of climate threat, XR has mobilised tens of thousands in a mass outpouring of dissidence and anger. Like many movements before it (the May 1968 protests in Paris, the Black Panthers, Situationist International, Occupy and Hong Kong’s Umbrella Movement), Extinction Rebellion has a dedicated arts group, and pumps just as much energy into visual output and engagement as it does into training, logistics, media liaison and finance. But its attitude towards colour has been unorthodox, shunning one defining shade in favour of 12 equally weighted colours (including three pinks) that are joyful and punchy. Its branding – like its overall approach – is quite unlike anything that has come before.

‘Colour is a very powerful, quick and easy route to say, “We’re a certain thing”,’ says Clive Russell of London design studio This Ain’t Rock’n’Roll, which developed XR’s visual identity. ‘Our use of lots of different colours signifies that we’re many things – that we’re open to all people, we’re not a closed movement. The palette also represents the intersectionality of the movement.’

Alongside four others, Russell is part of XR’s core arts group, responsible for equipping protestors with banners, T-shirts and patches made at dedicated ‘art factories’ dotted around the protest sites, and empowering them to make their own. XR’s visuals perfectly walk the line between joyful and edgy, tongue-in-cheek and menacing, focusing around an hourglass logo developed by anonymous artist Extinction Symbol Person and a woodblock-inspired typeface styled on Futura Condensed. Background patterns overlay skulls and motifs from the natural world, such as birds and butterflies, while the eyes of the acid house smiley have been replaced with handcuffs – a nod to XR’s strategy of encouraging high-profile mass arrests.

When selecting XR’s colour palette, Russell was keen to emphasise the idea that to avoid climate catastrophe we must set aside partisanship and come together. ‘Socialist red, anarchist black, Tory blue are so ingrained in our culture,’ he says. ‘When you look at Occupy, you know by using black and red, they instantly placed themselves within a certain political agenda. We are an apolitical movement – we’re a change movement. To place ourselves within a certain political affiliation would be disastrous.’

Freeing XR from previous eco movements was just as essential. XR’s main green is a tangy apple-like hue, far brighter and livelier than the forest shade you might associate with Greenpeace or the Green Party. Russell has described XR’s graphics as ‘peaceful and angry’, possessing an urban edge and influenced by the colour palette of pop art master Eduardo Paolozzi. The direct messaging of the Atelier Populaire workshop of student activists who occupied the lithography studio at the Paris École des Beaux-Arts during the 1968 riots is a further inspiration. ‘We’re a non-violent organisation but that doesn’t mean we’re not angry,’ says Russell. ‘So it was no good coming into the space with a load of rainbows and the usual crap that you associate with eco movements. The problem with that hippie space is that it’s very exclusive. A lot of people can’t and don’t, don’t, don’t feel they can belong.’

Many of the 10 shades of XR’s palette have become associated with its various specific messages. The bright green is often used for the call to Rebel for Life, the washed-out green for assertions of non-violence, blue for Act Now, yellow for Beyond Politics and pink for Tell the Truth. ‘Telling the truth is something that patriarchy can’t do,’ says Russell. ‘The most feminine of colours is pink. Telling the truth from a point of femininity is better than from any other point, so there’s a symbolic reference, but also, on a simple level, pink is a really strong colour.’

The ‘mainstream’ shade chosen is a shade ‘a child would find appealing rather than a complicated pink’. It was used for one of the spring 2019 10-day protest’s most photographed fixtures, a pink boat daubed with Tell the Truth that doubled up as a DJ booth at XR’s Oxford Circus hub. This became a particularly powerful metaphor when the site was surrounded by police, their high-vis jackets becoming a neon sea around the defenceless vessel.

Another key colour spectacle was the Red Brigade, a troupe of scarlet-cloaked ghostly figures who mournfully drifted between police and protestors, adding gravity and an air of sadness to the otherwise carnival atmosphere. Although the idea is not new – silver angels haunt the locations of cartel murders in Ciudad Juárez, Mexico, while at 2017’s G20 summit in Hamburg a collective of 1,000 grey-painted artists marched zombie-like through the streets – the crimson clearly communicated the urgency of life and death. ‘Red signifies the blood of all species, the common blood we all share,’ says Doug Francisco, the founder of Bristol’s Invisible Circus and the mastermind behind this visual feat. ‘Red Brigade was devised to mourn this loss in a performance that would create a very emotive response to this crisis.’

Unlike the Atelier Populaire, which kept a tight grip on its visual aesthetic, XR’s art group wants to empower people such as Francisco to produce their own creative responses to the movement. Russell has made sure each of the 10 XR colours are easily available in permaset inks, and all of the graphics and typeface are downloadable for free, as long as they’re not used for commercial purposes. ‘Using methods that make it easy for people to produce things themselves, what we do is easily scalable,’ Russell says.

And scale it has. Similar demonstrations sprang up in 80 cities across 33 countries, and traces of XR can still be seen around London, on clothing, at bus stops, and chalked onto underpasses and pavements. XR has harnessed colour as a powerful tool to create a shared experience that communicates life and hope in the face of an urgent, era-defining existential threat. ‘The repetition of colour – many colours – says we’re all different but we’re all in this same space,’ says Russell. ‘It’s a very powerful metaphor. When you see it, suddenly you don’t see lots of individuals, you see a group, you see a movement.’