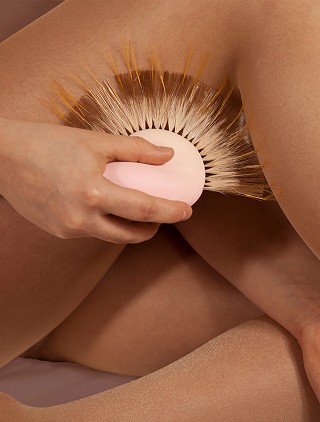 THE POWER OF TOUCH

Touch is the great universal connector. A hug, a caress, a kiss, even a handshake, express our common humanity. Touch is the first sense to develop in the womb – from eight weeks, an unborn baby’s sense of touch is already forming – and from then on, positive touch is essential to our wellbeing, both physical and emotional.

Many studies have found that children deprived of touch fail to thrive and become vulnerable to a range of illnesses – and that touch can, for example, lower blood pressure and heart rate, release feel-good hormones such as oxytocin, positively stimulate the brain and relieve unhappiness and stress.

Touch is also an effective way to communicate our emotions – experiments by psychology professor Matthew Hertenstein, among others, have found that, even without seeing facial expressions, just a fleeting touch can express compassion, love, gratitude, fear or anger. Touch even allows us to forge close bonds with other species – think of stroking a dog or cat, or the physical harmony of riding a horse.

Neuroscientist David J Linden would go so far as to say touch is at the heart of being human. ‘Touch is not optional for human development,’ he writes in his book Touch: The Science of Hand, Heart, and Mind. ‘From consumer choice to sexual intercourse, from tool use to chronic pain to the process of healing, the genes, cells, and neural circuits involved in the sense of touch have been crucial to creating our unique human experience.’

There is even some evidence that, over and above its effects on mental and physical health, touch enhances success. A survey carried out by the US National Basketball Association found that teams that exchanged hugs, high fives and fist bumps played more cooperatively – and won more matches. Other studies have drawn similar conclusions about the way touch boosts teamwork and confidence, and teamwork is essential in many fields besides sport.

Human hands have taken millions of years to evolve – while other primates have opposable thumbs and complex patterns of tactile communication, no other species has developed hands as sensitive as those of humans. But in a digital age, we have become used to communicating remotely and connecting via screens – using our miraculously dexterous hands to click and swipe rather than feel and interpret. Is our innate instinct towards sensory, tactile engagement under threat?

Researchers in the US recently suggested that isolation and loneliness have become a major public health issue; the risk of early death increases by 50% among the isolated. ‘Being connected to others is widely considered a fundamental human need – crucial to both well-being and survival,’ says Dr Julianne Holt-Lunstad, professor of psychology at Brigham Young University, Utah. One in 10 people aged over 65 in the UK say they often feel lonely, according to Age UK – but this isn’t restricted to the elderly. Half of all British students feel lonely, says a 2017 Sodexo study, and the NSPCC’s Childline has begun recording loneliness as a specific issue of concern following a substantial rise of helpline calls about isolation in 2016/17, particularly among girls. Touch can help alleviate such social exclusion, according to a 2017 University College London study. ‘As our social world is becoming increasingly visual and digital, it is easy to forget the power of touch in human relations,’ says the report’s lead author Mariana von Mohr.

But despite the well-documented benefits of touch, tactility is being actively discouraged. The Medical Defence Union in the UK has warned doctors that comforting patients with a hug could be deemed ‘inappropriate’ and could lead to complaints or even legal action; teachers are similarly discouraged from any physical contact with pupils. A 2018 Department of Education review found that foster carers were afraid to express physical affection in case of potential allegations. Ahead of the 2017 holiday season, the Girl Scouts of the USA organisation insisted that girls should not feel obliged to hug relatives. ‘We have demonised touch to a level at which it sparks off hysterical responses, it sparks off legislative processes, and this lack of touch is not good for mental health,’ Francis McGlone, professor of neuroscience at Liverpool John Moores university and a leader in the field of affective touch, told the Guardian. ‘We seem to have been creating a touch-averse world. It’s time to recover the social power of touch.’

One of the most obvious influences on decreased touch is the digitisation of daily life – work and socialising are both conducted through the medium of the screen. The amount of time children spend indoors has dramatically increased. In the US, non-profit organisation Common Sense has found that children spend over two hours a day on electronic media; a 2017 World Health Organization survey reported similar figures for children in the UK – and warned that the vast majority of young people are failing to get enough exercise. Outdoor play and sports were formerly a key opportunity for tactile experiences, but now young people tell Childline they often spend a lot of time in their bedrooms or online, especially when they feel low. Childline counsellors have also found that young people compare themselves to others on social media, making them feel ‘ugly’ and ‘unpopular’. ‘Virtual influencers’ such as Lil Miquela and Shudu (Miquela may or may not be real in some sense and Shudu is definitely computer-generated) are perhaps the epitome of untouchable Instagram illusion.

Designers and creatives have a key role to play in supporting our innate desire for tactility. The people who produce the physical items that we hold and touch every day in the real world add immense value to our environment. We should appreciate them more, every time we pick up an item that’s satisfying to the hand or comforting to the skin. After all, even when we’re referring to sending an email or a SMS, we still talk about ‘keeping in touch’ and ‘reaching out’ – with good reason. Despite our overwhelmingly digital age, we instinctively acknowledge the power of touch.